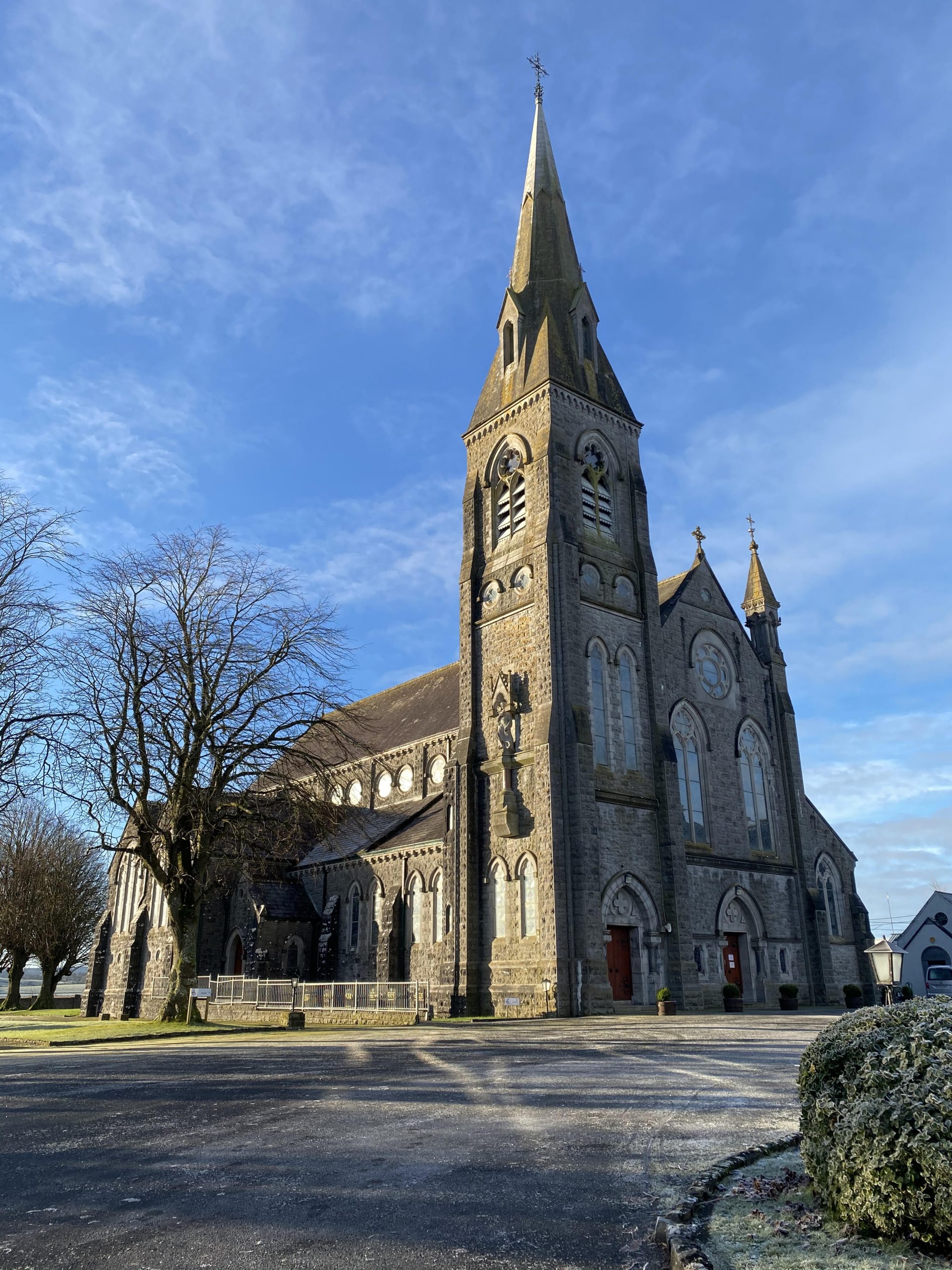 St Brendan’s Cathedral stands at the western extremity of the Diocese of Clonfert on the main highway from Dublin to Galway. The foundation stone of the cathedral was laid on 10 October 1897, and the fabric was completed in 1902. Plans were drawn by the Dublin architect William Byrne for a building in the neo-Gothic style, having a nave and an aspidal sanctuary, lean-to aisles and shallow transepts, with a graceful spire at the western end. Its dimensions were determined by the needs of the parish of Loughrea. While not impressive, its proportions are good, and despite a departure from the original plan by curtailment of the sanctuary, the overall effect is pleasing. The simplicity of the exterior, however, hardly prepares the visitor for the riches within. It was due to two fortuitous circumstances that St Brendan’s became a veritable treasure house of the Celtic Revival in sculpture, stained glass, woodcarving, metalwork and textiles.

The first circumstance was that the building of a Catholic cathedral was delayed for various reasons until close to the turn of the last century. The Irish Literary Renaissance was by then well advanced. When the building was completed in 1902, the Arts and Crafts movement was having effect.The second circumstance was that of Edward Martyn’s birth at the home of his maternal grandfather, James Smyth, in the parish of Loughrea. Martyn was an ascetic man and devoted his time and fortune to the development of every phase of the Irish revival, the Gaelic League, Sinn Féin, the Irish Literary Theatre, Irish music, church music and church art. With innate business acumen, he insured by personal donation and the financial support of the Smyth family that the new cathedral would reflect his views. The bishop, Dr John Healy, who was sensitive to the prevailing trend, accepted the challenge and assigned the project to the supervision of a young curate in the parish, Fr Jeremiah O’Donovan, who was himself actively engaged in propaganda for Revival. John Hughes was the foremost sculptor in the country at the time, and Bishop

Healy commissioned him to do the modelling and carving. His work is found in the bronze figure of Christ on the reredos of the high altar and in the magnificent marble statue of the Virgin and Child. Michael Shortall, a student of Hughes in the Metropolitan School of Art, did the carvings on the corbels and executed the statue of St Brendan on the wall of the tower. His connection with the cathedral continued over twenty years, and he was responsible for carvings of incidents from the life and voyage of St Brendan carved on the capitals of the pillars.

The Yeats sisters, Lily and Elizabeth, along with their friend Evelyn Gleeson, set up the Dun Emer guild. They embroidered twenty-four banners of Irish saints for use in the cathedral. Jack B. Yeats and his wife Mary designed these banners. With an economy of detail and richness of colour, they almost achieve the effect of stained glass. Mass vestments, embroidered with silk on poplin, also came from the same studio.

More than anything else, St Brendan’s is famous for its stained glass. Martyn was particularly concerned about the quality of stained glass then available in Ireland. He was eager to set up an Irish stained glass industry. He succeeded in having Alfred E. Childe appointed to the Metropolitan School of Art, and he later persuaded Sarah Purser to open a cooperative studio, where young artists could be trained in the technique of stained glass. This new studio, An Túr Gloinne, opened in January 1903, with Childe as manager, and so began the work of the Loughrea stained-glass windows. Over the next forty years, Childe, Purser and Michael Healy executed almost all the stained-glass windows in the cathedral, and it is these windows that have given the Cathedral of St Brendan its place in the Irish Artistic Revival.